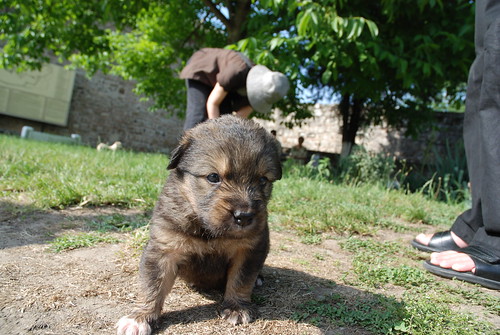 On the grounds of the Tirgoviste palace, where Vlad Tepes was prince of Wallachia.

Found Internet Library of Early Journals on Jeremy’s page. This is cool. I hope it has journals with gothy stories from the early 19th C.

Just a quick saying hi from Dracustan! We’ve finished the ‘count dracula’ stuff and are going to Aref to do a ‘homestay’ and climb up to vlad tepsesh’s fort. Then paris!

One of my students, Joe, just forwarded me this link to the full version of Dracula. It is the 1931 version with Bela Lugosi. I didn’t know it was avail online!

Get on to the corporate radar with Dracula management

Elizabeth, aka The Blooferlady, emailed me this today about how to Careers: Get on to the corporate radar with Dracula management - 19/Jan/2007 - ComputerWeekly.com. I guess IT is revenant after all.

Weep Not for the Vampire by William A. Veselik
Dru Pagliassotti, California Lutheran University
http://theharrow.com/journal/viewarticle.php?id=1169

The Harrow: Original Works of Fantasy and Horror
http://theharrow.com/journal/

I just picked up a copy of Curran’s book “Vampires: A field Guide…” as I’m looking for celtic vampire references. While googling to find how this Dr. Bob is, I found: Show 11 - Vampires! on Odeo: “On this week’s show, author Dr. Bob Curran tells us about vampires and how they differ from the Hollywood stereotype!” And i’m having a listen. Fun? Wow.

Rochelle was telling me about this Jesus in Japan | MetaFilter thing… so I went to have a look. Lots of fun information on
Cercle Zetetique : Jesus Christ’s grave in Shingo, Japan! including: “…eat a nice “Dracula” ice cream, which, in addition to being delicious (Shingo garlic is not renowned for no reason!), will turn vampires away. The crucifix drawn on the lid will finish repelling any vampire still surviving after the garlic (and a crucifix is right in the theme of the place)!”

Now, what could be better than that?

Dracula on the other hand, or Count Vladamir Dracula, was a powerful nobleman in Rumania, not Transylvania, who lived around the 4th century A.D. According to Johnson, Dracula entered the lore of Halloween when a priest came to visit him in the night, and refused to show the proper respect to the count’s status by removing his hat, citing his devotion to God as his only master. Dracula, unimpressed with the priest’s candor and dedication, had his guards screw the priest’s hat into his head so that he may never forget whom it was he disrespected.

HOw do people who call themselves Dr. get to spout idiocy? Easy, they recourse to the newspapers. I wonder if you can guess what’s wrong. Well, if you’ve read Dracula Sense and Nonsense, you’d know that Romania wasn’t a country until the 19th C. Dracula, i.e. Vlad Tsephes (spelling close) was a voivoid (military ruler) in Wallachia, in the 14th C (or 15, give me a break). He has never entered halloween, but he is reputed to have nailed turbans to a sultan’s envoys’ heads.

But we believe what we read in the papers… I guess I can use this in my critical thinking class today. Rule of thumb: If you know that half the facts are bogus, assume they all are bogus, and don’t trust the source or the reporter in the future.

This article is great. It proves once again how you can come up with logical answers based on non-sensical initial conditions. His taken for granted assumption, that this one definition constitutes the totality of the myth, is unfounded, so everything else that follows has internal consistency, but no external valitity. Of course I’m not saying vampires exist, but that his evaluation of the situation adds nothing except some wonderful Halloween discussion. Which in the end is what mathematics is all about, no?

Some interesting counter balances include the fact that all vampires pretty much die at the end of the movie, or in the morning (in movies). Of the stories I’ve read, most vampire stories that predate the 19th C don’t have everyone turning into vampires after they are bitten. And in many stories, the vampire can’t cross water… so islands would be relatively safe

A researcher has come up with some simple math that sucks the life out of the vampire myth, proving that these highly popular creatures can’t exist.
University of Central Florida physics professor Costas Efthimiou’s work debunks pseudoscientific ideas, such as vampires and zombies, in an attempt to enhance public literacy. Not only does the public believe in such topics, but the percentages are at dangerously high level, Efthimiou told LiveScience.
Legend has it that vampires feed on human blood and once bitten a person turns into a vampire and starts feasting on the blood of others.
Efthimiou’s debunking logic: On Jan 1, 1600, the human population was 536,870,911. If the first vampire came into existence that day and bit one person a month, there would have been two vampires by Feb. 1, 1600.  A month later there would have been four, and so on. In just two-and-a-half years the original human population would all have become vampires with nobody left to feed on.
If mortality rates were taken into consideration, the population would disappear much faster. Even an unrealistically high reproduction rate couldn’t counteract this effect.
“In the long run, humans cannot survive under these conditions, even if our population were doubling each month,” Efthimiou said. “And doubling is clearly way beyond the human capacity of reproduction.”
So whatever you think you see prowling around on Oct. 31, it most certainly won’t turn you into a vampire.