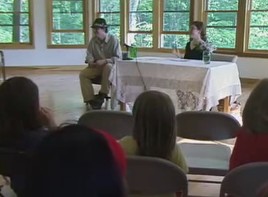 This YouTube video is the trailer for a documentary called “Voices from the New American Schoolhouse,” which chronicles the radical education practiced at the Fairhaven School in Upper Marlboro, MD. Fairhaven appears to be a classical free-school, in which kids self-govern, design their own curriculum, and tutor their peers. I went to publicly funded schools like this from grade four to graduation, and they were the most important factor in the way I conduct my own adult life. Attending schools like this teaches many kids to run their own lives, blazing their own trail, inventing their own careers, and trying anything. Useful skills in a world where any job that can be described is likely to be outsourced.

The documentary is narrated principally by the school’s bright, well-spoken students, who are eloquent and passionate advocates for open education.

Filed under:
Learning, lj by jason