Iranian hackers brought down micro-blogging website Twitter for around two hours this morning.
The attack took place at around 6am and left the site’s estimated 30million users unable to send messages or post ‘tweets’.
The main Twitter homepage had been replaced with a black and red screen featuring an image of a green flag.
The page carried the message: ‘This site has been hacked by the Iranian Cyber Army.’ 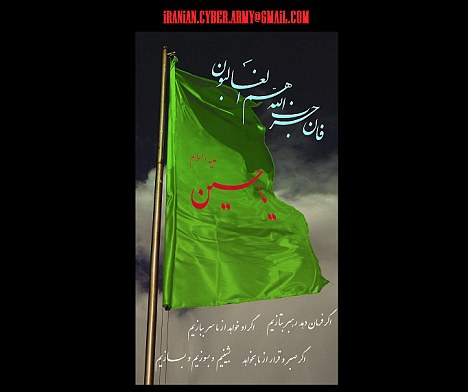 The site reappeared around two hours later, with staff telling users: ‘We are working to recovery from an unplanned downtime and will update more as we learn the cause of this outage.’
It is believed that Twitter’s DNS records were hijacked in the attack meaning that users who were trying to visit the site were actually redirected to the new page.
The DNS, which stands for Domain Name System, connects the name of a website, in this case twitter.com, to the servers which hold its contents.
A short statement was issued on the company’s blog.

It read: ‘Twitter’s DNS records were temporarily compromised but have now been fixed.
‘We are looking into the underlying cause and will update with more information soon.’
Websites such as Twitter and Facebook became a focal point for young, urban Iranians opposed to President Mahmoud Ahmadinejad, who defeated opposition candidate Mirhossein Mousavi in the presidential election.
Many Iranians used Twitter to arrange demonstrations and keep up to date during the unfolding saga.
According to Internet censorship monitor OpenNet Initiative, Iranians began taking to the internet in droves during the 1997-2005 presidency of Mohammad Khatami, when dozens of independent publications were shut down and journalists jailed.

Filed under:
lj by jason